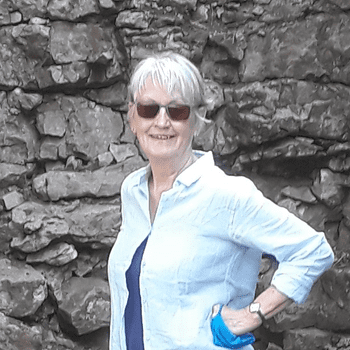 Born in the Sudan, Caroline Moir has lived and worked in places as far apart as Syria and Newfoundland, Argentina and Spain. She has been commissioned to write four plays: for Ripon Cathedral St Wilfred of Ripon 2009; for Kendal Community Theatre A Passion for Kendal 2012, Lady Anne Clifford ~ a Woman Cast Out 2013, The Wednesday Play: the plot to kill Jesus, 2015.

She has had stories published in print and online some of which are collected in the swaying corridors of the wagons-lits: a memoir in short story which was long listed for the Cinnamon Literary Prize in 2020. She is seeking a publisher both for her memoir and for Hunting Jenet Nish, the first in a trilogy of short novels set in British Columbia.

Her debut novel, Brockenspectre, set in the Lake District and Argentina, was short listed for the Sceptre prize and will be published by Victorina Press in November 2021.

Do you have questions for Caroline Moir?

Log in to ask Caroline Moir questions publicly or anonymously.

Caroline Moir
Dr
Posted 13 days ago
Their Eyes were Watching God Zora Neale Thurston
Their Eyes were Watching God is an extraordinary book – the only comparison I can make is with Moby Dick or Toni Morrison’s Beloved. It is completely different but it shares with both of these novels a crescendo of emotion which leaves the reader breathless. Janey has a lyrical, mystical awakening to her sexuality, ‘Oh to be a pear tree – any tree in bloom! With kissing bees singing of the beginning of the world.’ This is tarnished by her grandmother’s insistence she marry, and escape the everyday drudgery of black womanhood. Eventually, as a mature woman, she recaptures the ecstasy, loses it again, but is reconciled to her loss by another mystical, lyrical experience. A should have read before now and a must read to other readers.
Book review

Caroline Moir
Dr
Posted 2 months ago
Why does I Capture the Castle by Dodie Smith have enduring appeal despite its unbelievable setting and plot and the thinness of its characterisation for graduates with first class degrees and double PhD's in English (not me)? I thought I had read it but I hadn't and yet I am.